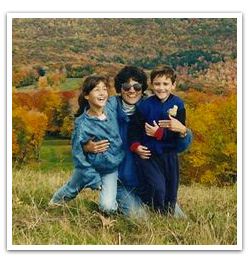 Lucie M. Walker was born in Quebec, Canada, the only daughter of Louise Deschenes Merette and the late Andre’ Merette. Her family came to the United States in 1961 and later moved to Kingston where Lucie attended Kingston public schools.

Fluent in Spanish and French, Lucie had planned to become an interpreter at the United Nations in New York City. Her career plans changed, however, when she married Charles “Bud” Walker in 1983 and settled in Kingston. Lucie soon embarked on a new career as a travel agent that would span nearly two decades and afford her the opportunity to travel throughout the Caribbean, Mexico, Europe and the United States.

In 1986, Lucie and Bud moved to Hurley and started a family. Their daughter, Larissa Anne was born first, followed three years later by their son, Charles Jesse (CJ). For the next 10 years, Lucie devoted herself fulltime to motherhood, playing an active role in all of her children’s school events, sports and organizations.

During this period Lucie also found time to volunteer with numerous civic organizations, serving on the boards of the Hurley Recreation Association, Hurley Heritage Society and the Hurley Nursery School. Lucie returned to the work force full-time in 2000 when she joined the retail staff of Woodstock Harley Davidson in their motorclothes division.

After being diagnosed with stage IV metastatic colon cancer in 2005, Lucie refused to allow cancer to dictate how she would live her life. In spite of numerous procedures, surgeries and chemotherapy treatments during the next five years, Lucie maintained her vibrant spirit and munificent personality. She remained active in the community and continued to work at Woodstock Harley Davidson until her untimely passing in 2010 at the age of 53.

Throughout her life Lucie personified her favorite maxim: “Life is not about waiting for the storm to pass… it’s learning to dance in the rain.” Her unending generosity, courage and faith were an inspiration to everyone that knew her and Lucie taught all of us how to dance up a storm.